Another Day in John Ashcroft’s AmeriKKKa


These new airport screeners are certain to cause controversy. They “see” through clothes to an extent, but the picture of a person without hair is not flattering. It is unlikely to be very titillating to anyone.

Of course, Muslims will freak out. Any guy who forbids “his” woman to show her face in public will lose his mind when he sees this image: 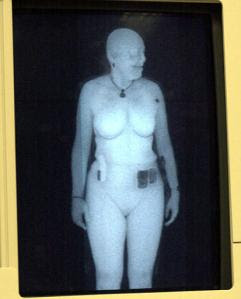 In a funny twist, Muslims are the very people who need to face the most scrutiny at airports.

Perhaps this will round down the pool of people from the Middle East: we will only see those who really want to get in.

And those are the people who need a really good look anyway.

You can just hear the dialog now:

“No, Abdul, the screeners don’t want to see you naked. But I have to admit, that bird’s nest of a beard does make you look quite handsome….”

(It is especially galling to listen to complaints from foreign Arabs that they face increased scrutiny at US airports. When I went to Tunisia, we were detained for 45 minutes and extensively interviewed by AK47-toting guards. They asked us if we were Jews, and whether we had ever been to Israel.)