Chrissie Hynde, washed-up lead singer for the Pretenders, protests against KFC in France. 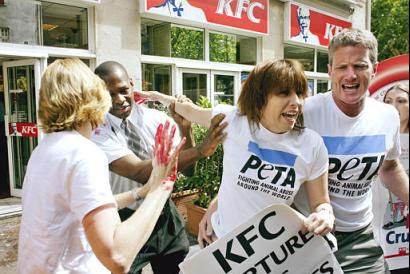 Hynde, who has aged poorly, was once considered “cool” by the hip crowd.

But they drive minivans now.

The protesters have dipped their hands in red paint. This symbolizes blood, and they hope to stain people’s shirts to make them see PETA's point. It might work in France. In the USA, it would be a good way to get punched out.

I myself once thought Hynde’s music was passably good. For pop.

But you can’t eat second-hand, scratched LP’s. Even if you could, they wouldn’t taste as good as a big honkin’ bucket of Original Recipe.

PETA, which has no idea how ridiculous it looks, recently took a break from bashing the Colonel because they had fry bigger fish…uh...chunks of tofu to fry.

They want to race a soy wiener against the pork products.

No, you can’t make this shit up. Look, they admit it!