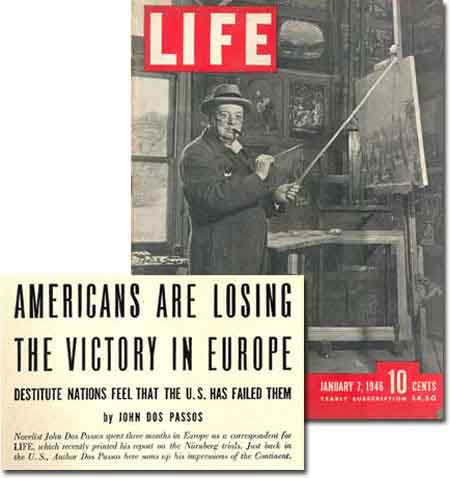 The troops returning home are worried. “We’ve lost the peace,” men tell you. “We can’t make it stick.”

A tour of the beaten-up cities of Europe six months after victory is a mighty sobering experience for anyone. Europeans. Friend and foe alike, look you accusingly in the face and tell you how bitterly they are disappointed in you as an American. They cite the evolution of the word “liberation.” Before the Normandy landings it meant to be freed from the tyranny of the Nazis. Now it stands in the minds of the civilians for one thing, looting.

You try to explain to these Europeans that they expected too much. They answer that they had a right to, that after the last was America was the hope of the world. They talk about the Hoover relief, the work of the Quakers, the speeches of Woodrow Wilson. They don’t blame us for the fading of that hope. But they blame us now.

Never has American prestige in Europe been lower. People never tire of telling you of the ignorance and rowdy-ism of American troops, of out misunderstanding of European conditions. They say that the theft and sale of Army supplies by our troops is the basis of their black market. They blame us for the corruption and disorganization of UNRRA. They blame us for the fumbling timidity of our negotiations with the Soviet Union. They tell us that our mechanical de-nazification policy in Germany is producing results opposite to those we planned. “Have you no statesmen in America?” they ask.

(Thanks to Jessica's Well)