I hope it wasn't photoshopped: 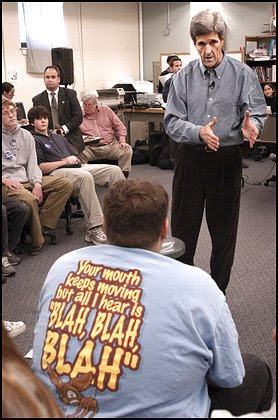 (Thanks to Tim Blair)

Either way, giddy rival campaigns see a metaphor. The image could be the most damaging since Kerry was captured nibbling at a cheese steak in Philadelphia after requesting Swiss cheese.

I've generally thought that Kerry suffers from a disease that seems to afflict Democrats in high numbers: Opinionpollitis - saying anything that seems popular only to be trapped by your words when public opinion sways.

You can love George W. Bush or hate him. You can think he is an evil strategist or a bumbling idiot or both (somehow). But when Bush says we will stay in Iraq until the job is complete, he means it. That's principle, and in a leader it is vitally important - particularly when it comes to national security. When he says he plans to cut taxes or ignore dumb ideas from France, he is serious.

Unfortunately, when it comes to government spending, his principles are just wrong.

But since when were Democrats known for cutting government spending?

He has taken their key issue (vote for me and I'll send you money from the treasury!) and made it his own.

Too bad it's such a shitty issue.