Sheikh Yassin has said the happiest day of his life would be the day he died a shahib (a martyr).

He certainly had a smile on his face here (GRAPHIC IMAGE ALERT! I warned you!) (well at least on the half of his head that still has a face on it).

You may wonder how I can feel such joy over a man's violent death?

Only because I remember that the hatred that this man spewed was responsible for the murder of this little girl: 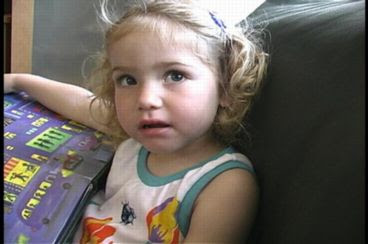 and dozens of others like her. People inspired by Yassin killed her - a five year old girl - just because she was born a Jew.

I have nightmares that I am Gal Eizenman's father. I can't imagine living a waking day with such misery.

A little more: From It Can't Rain All The Time:

And, of course, Hamas and the Palestinians have gone batshit —

The eyes of many burned with tears of rage as they chanted slogans like “death to Israel” and “death to America”, the BBC’s David Chazan reports.

All appeared united in mourning for the founder of Hamas, the group which has been one of Israel’s most intransigent enemies, adamantly rejecting any peace negotiations, our correspondent says.