Michael Moore is a mole


Frustrated by the perplexing intricacies of Campaign Finance Reform, the Republicans have done something so completely diabolical, so wicked, that even John Ashcroft and Dick Cheney blush when they think about it.

They have infiltrated the Looney Left with one of their own. And he has become a hero of the crystal worshippers, Earth mother types and the granola crunchers.

The tin foil hat brigades and moonbats? They just can't get enough of him.

By the time November rolls around, Americans aren't going to be able to think about John Kerry without seeing Michael Moore's crooked, shit-eating grin.

In reality, Michael Moore is somewhere to the right of Jesse Helms, and he knows exactly what he is doing.

Some people on the left have caught on to what a hazard he is (but most have fallen into the Rovian trap). Even Moore's friends defend him by saying he's dishonest, but hell, his heart's in the right place.

This guy was designed in a secret lab in the White House to repel the very people the donks need in order to win this election.

Maybe it was his zeal to save American democracy from the sinister control of huge corporations. Or maybe, if you believe folks at CNN, Michael Moore was just being a jerk.

...the acclaimed director of 'Fahrenheit 9/11' initially refused to return a hard-to-get convention floor credential yesterday to CNN - a subsidiary of the Time-Warner media conglomerate - after being interviewed in the Fleet Center on the cable net's CNN 'American Morning.'

Reliable CNN sources said Moore punctuated his refusal with an eruption of abusive profanity at a female guest-booker and male staffer who attempted to retrieve the floor pass, dropping the F-bomb and muttering the C-word.

Yesterday, Moore and his associate producer, Joanne Doroshow, vehemently denied the account, saying that Moore surrendered the coveted credential when asked and never hurled abuse at the CNN staffers.

But I'm told that when Moore's interview with CNN anchor Bill Hemmer ended, a producer politely asked Moore for the credential, and Moore erupted profanely within the hearing of multiple witnesses.

Then, with CNN's credential around his neck, Moore circled the floor doing interviews with other broadcast outlets - while CNNers huddled trying to figure out how to retrieve the pass.

An unlucky female booker trailed him to obtain it, even following him into an elevator.

'F- c-!' Moore allegedly muttered - though it was unclear if Moore was referring to her or was still seething about his interview with Hemmer.


This guy is radioactive. The Geiger counter is going crazy and he is is emitting an erie green glow.

To a moonbat, the glow is comforting and seductive.

Jimmy! Stay away from the glow! Jimmy! Jimmy! Nooooooo! 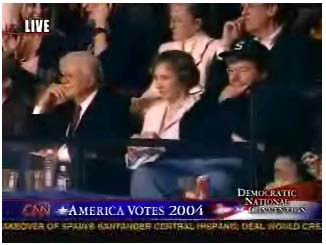