I was amused by the media coverage afforded Joe Wilson when he accused Bush of lying about Saddam Hussein and his yellowcake adventures in Niger. It was a media frenzy, and it sparked congressional investigations and allegations like "Bush lied!"

(By the way, I acknowledge Bush has been FOS on many occasions (like deliberately misleading Congress on the true cost of his Medicare package), but in this case he was completely accurate. My rule: all politicians lie. Get used to it.)

The media gave Wilson a nice platform and he called for more honesty from the Bush Adminstration.

Well, it turned out that Wilson was lying.

And was the media outraged about being duped?

Accusing the political hacks in Washington of being gullible fools?

Obsessed with what Saddam wanted to do with a few tons of yellowcake?

No. I got the sense that the media was...well..silent.

I wasn't alone. Some others noticed to, and it is interesting to see it in the form of a table: 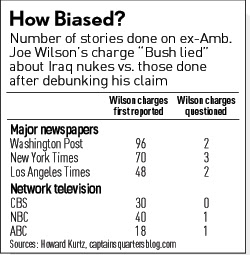 Thanks to Anticipatory Retaliation.