A suspected insurgent is found setting bombs underneath cars in Baghdad: 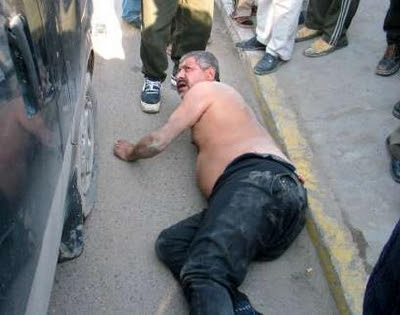 As you can see, the Iraqi populace rejoices at the presence of this comrade-in-arms, raising him up on their shoulders and praising his name.

No. He is cowering before them, begging for them to be merciful.

They weren't. They beat him viciously. He's lucky if he's alive today.

Let them media say that the people killing Iraqi civilians are gaining support.

I like the polls, and there are lots of polls.This one is interesting. A poll of 4000 residents of Baghdad:

Will the security problems cause you to?

Do you support military action against the terrorists?

Will Iraqis have the courage to overcome the demons of their past? We should hope so. Because a region where people like this man command armies will never cease being a threat to the world.

Thanks to Michael J. Totten for the photo (and a large portion of the sentiment).