Every now and then on Blog Explosion, I come upon a truly great post. Today, I was lucky enough to see this one, from Nervous Rodent's View From the Bottom.

I reproduce it in full, with Kudos to him:

Each of these facts was presented by Iraq Vice President Ghazi al-Yawer, an elected representative of the Iraqi people, at a press conference. Can you guess which was used to title the AP article that described the conference? 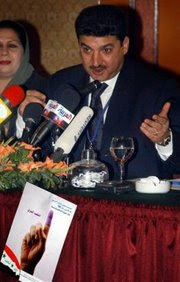 Iraqi Vice President insists that the Iraqi people need US forces to protect them from terrorists.

Iraqi Vice President dismisses calls for a withdrawal timeline, saying "I wish it were that simple."

The correct answer? None of the above. AP chose to the this story with the headline "Training of Iraq Forces Suffers Setback."

I know what you're thinking. Of course Yawer wants the US to stay. He's a Shia Muslim that's finally been able to take control of the government with the help of the US. If we leave, Sunnis will overthrow the government and he'll be back on the street. Nope, Yawer is a Sunni Muslim, who advocates peace and secular politics. Despite being a Sunni Muslim, he's no fan of Saddam Hussein. The "setback" he referred to? Some of the newly trained Iraqi forces are using Saddam-era tactics, indicating it will take longer than expected to develop an army that fights fair, with minimal damage to civilians.

Come on, AP. How hard is it to write a headline that isn't full of negative spin? If you wanted to say Yawer disagreed with Bush's assertations that the Iraqi forces are growing strong, what was wrong with "Iraqi Vice President Asks US Not to Withdraw Troops"? A headline like that might convince people that staying the course is the right thing to do. A "setback," on the other hand, sounds like something bad is happening -- and maybe we should pull out.

Iraq is a sovereign nation ruled by an elected government. Since when has America turned a blind eye to free democracies asking for help from terrorists and those who wish to build dictatorships? Regardless of why we went to Iraq, it is our duty to protect freedom and democracy, wherever it grows.